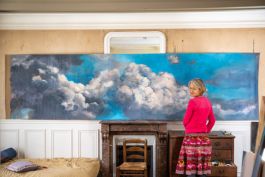 Born in Maryland to a Franco-American couple, I grew up astride the Atlantic. I moved to Paris for high school, passed my “baccalauréat litéraire” and returned to the United States for college. At Yale I studied Comparative Literature, and then returned to Paris to work as an English language journalist for ten years (Newsweek, UPI, Agence France-Presse and National Public Radio).

I had thought writing would be my métier, until at 27 I broke up with my journalist boyfriend and fell headlong into painting. Another writer introduced me to the pastel artist Pierre Skira, with whom I would study for 15 years. Skira was an assistant teacher in the studio of Leonardo Cremonini, who in turn accepted me in his atelier at the Beaux-Arts School in Paris.

Later I learned monotype, in René Tazé’s printing studio. I met the painter and print-maker Jean-Baptiste Sécheret there. He introduced me to plein-air painting with his class at the Architecture School of Belleville, where I became his assistant, and then his substitute. I found that in situ landscape painting was the bridge between my three continents.

Today I again live between two countries – France and Uruguay, where I set up my second studio in 2006.